The Growth of the Hybrid 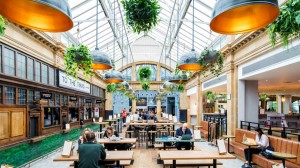 Back in the day most big cities had their own flagship department store.  Growing up in the North West, for me that was Kendal Milne in Manchester, in Newcastle it was Fenwick’s and in Birmingham it was Rackham’s, not forgetting the likes of Harrods and Selfridges in London.  The highlight of a visit to one of these was often the chance to have something to eat or at least a coffee in their onsite eatery or cafes.  For some reason it always felt slightly more special than if we had just gone to a ‘normal’ restaurant.

Although many of these are now part of bigger groups or indeed closed, the concept is alive and well.  It has been developed further by the likes of John Lewis, with in-store franchises and perhaps somewhat bastardised with the creation of food halls in shopping centres such as Meadowhall in Sheffield or Westquay in Southampton.

In pursuit of the ultimate USP (unique selling proposition) as well as a desire to embrace a number of individual passions, operators across the world have taken this idea and almost turned it on its head.  To differing degrees, they have taken their food & beverage offer and fully integrated or imbedded it into another retail or business offer.

Whilst this isn’t for everyone, is there an opportunity for some operators to be even more creative in terms of what they could offer?

Before diving into specific concepts and examples its worth thinking about some of the basics.  While there should be almost no limit in terms of what you can mix and match when it comes to what other services you offer, you still have to be mindful of health, safety and hygiene factors.  This means that there still might need to be clear demarcation between the different elements of your offer.  This should help maintain the safety of both your customers and your staff.

Another important thing to consider is how your two (or more) concepts help support each other?  In the department store examples above, this helped keep customers in-store longer.  Refreshed and rejuvenated customers are often more likely to continue with their shopping in your outlet rather than going elsewhere.

Over the last 10 years or so there has been a rise in the number of people getting into cycling.  So not only has the there been a growth in bike sales, but there has also been a growth in the need for cycle repair shops.  And many repairs usually take a lot longer than 5 minutes.  Anyone who owns a car knows how boring it can be to sit in a garage waiting room for hours on end.  Even with the bigger operations the best you can hope for is a coffee machine, some newspapers and perhaps rolling news on a TV screen.

This has led to the emergence of what can simply be described as Cycle Repair/Café shops.  Outlets where not only can you get advice and work done on your bike, but you can also enjoy a range of food and drinks while you wait.  From an operator’s point of view not only does this provide an additional revenue stream, but it also offers the opportunity to do some upselling of other products and services.  Customers tend to be more open to listen to such offers when it’s done in a low-key relaxing way.

From a customer’s point of view not only does it give them somewhere to be while they are waiting for their repair etc. it is most likely they will be in the company of like-minded individuals which can help generate a sense of community and belonging.

Another model which is becoming increasing popular is for cafes, restaurants and even in some cases pubs to also sell a range of food and drinks for off-sales.  In the bigger towns and cities this idea often manifests itself in the form of a restaurant/delicatessen.  Examples of this would be Benugo (Great Portland Street) London or Marmadukes in Sheffield.

In more rural areas the range of food stuffs available is often more run of the mill representing the needs of its customers.  This may be for local residents or in some cases it supports those using nearby campsites.

Following the restrictions placed on many operators during 2020-21 I heard a number of stories of operators re-purposing their whole retail operation in order to sell food & drinks as off-sales.  Looking to the future it will be interesting to see how many of these retain some or all of this or whether they simply revert back to their previous offer.  It wouldn’t surprise me if many retained at least some elements, not least as it might be a way of future proofing against any other restrictions going forward. 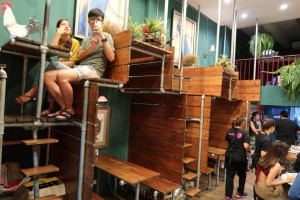 When it comes to hybrid concepts, practicalities aside the only limitation is your imagination and of course whether there is a genuine customer desire or need for what you are offering.  If there isn’t, then you risk just becoming self-indulgent and it is unlikely to end well.

One of the more unusual examples of this I have personally come across was Belle Epoque in Milford-on-Sea in Hampshire.  Unfortunately, now closed, I had the pleasure of visiting on a couple of occasions.  From the outside it appeared to be your typical south coast antique shop, however on entering you also discovered a range of home cooked meals as well as a remarkably good range of wines.  As well as the quality of the food, the real joy came from the quirky surroundings and the fact that the lamps, paintings and other bric-a-brac around you were all available to buy!