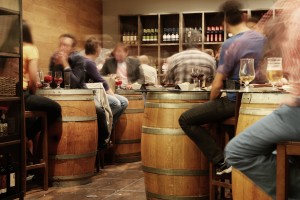 Working in a restaurant or bar in one capacity or another is something many of us have experienced at some point in our lives.  For me it started in a small wine bar in the town I lived in when I was 17/18.  My duties included cooking in the kitchen, although mainly reheating pre-cooked meals in a microwave, serving tables and from time to time serving drinks from behind the bar.  As there were usually only a couple of us working most of the time, it was generally agreed that any tips which were received would be shared equally at the end of each session.  This also helped balance off the fact that there were no set rules in terms of who served the food and cleared the tables – it depended on how busy we were.

It wasn’t until I started to work in other outlets that I realised that this was not the way things normally worked.  This was made very real for me when after working quite a long shift in one particular restaurant albeit behind the scenes.  I discovered that tips received were kept by the individual waiting staff who worked which ever table it was who left a tip.

Over the last few years I have heard similar stories from both front and back of house team members who have questioned why it seemed that only those waiting on tables were the ones to benefit from this additional boost to their pay.

So is this fair? 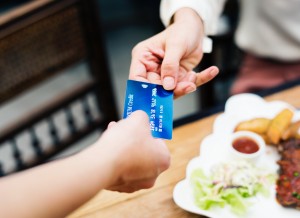 Although there will be exceptions, in this country tips are often seen as an added bonus, particularly in more casual dining outlets and pubs.  Contrast this to America where tips form a very important part of what an individual can and is expected to earn during any shift.  Talking with friends and colleagues, there is also quite a varied view on where or when a tip is appropriate.  Some do it as a matter of course, while others only do it when the food and service has been particularly good.

Something else which gets mentioned a lot when talking about tipping is how easy or difficult it can be.  When we operated in a cash dominated economy leaving an extra couple of pounds or a £5 or £10 note was quite easy to do.  Now we are predominantly paying by credit card things can get a bit more complicated.  Some card machines give you an option to add a tip which can be quite straightforward whilst others require a degree of mental arithmetic in order to round the total bill up to an acceptable amount which then doesn’t make any tip you might add look derisory!

There can also be a great deal of uncertainly by paying customers as to whether any tips left will actually go to the staff at all or whether they just get swallowed up by the operator themselves.

This is particularly a concern when restaurants and the like add a ‘discretionary’ 12½% service charge to the bill.  What is it there for, who gets it and how discretionary is it are questions which customers often ask?  I was in London a couple of years ago and was asked by a waiter whether I wanted to leave a tip.  I explained that they had already included the “discretionary” service charge only to be told that none of the waiting on staff sees any of this as it was part of the normal bill.  Needless to say I haven’t been back to that particular restaurant.

Without wanting to sound mean I also note that in most cases the 12½% is calculated after VAT, so in actual fact as a customer you are paying even more.

Things like this can seriously confuse customers and put them off from leaving tips to reward great service.  This in turn can have negative impact on the staff and how they then behave.

Who are we tipping 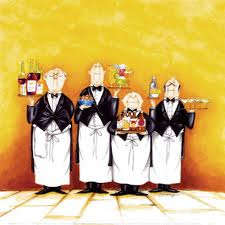 When you work in an industry there is a tendency to over think things.  In most instances as customers we are far more simplistic in terms of the way we behave and act.  For example if you go out for a meal and have a great time, in the majority of cases when it comes to paying the bill you’ll leave a tip.  In doing so consciously or subconsciously you are probably rewarding the one or two people you have had most contact with, which will usually be the waiting on staff.  As result whether you tip or not and how much you tip is usually down to the level of service you have received from these individuals.

Yet if you were to think about it, and we usually don’t, our overall experience has probably been made great because of the efforts of many different people throughout the restaurant or bar.  Not just the people who took the order and brought the food, but also the person who made or poured the drinks as well as the chef in the kitchen who made the meal.

If that is true, then is there a case to be made to share any tips with a wider group?  If so, should that be front of staff only or should it be back of house to?  Should a glass washer or someone who clears tables receive the same amount as someone who has to deal with difficult customers and is continually taking orders and serving tables?

For a large venue this can be quite complicated.  Also if you adopt this approach do you run the risk of devaluing the efforts of the waiting on team?  If that happens they may not deliver quite the same level of customer service they would have if they knew they were getting all or a bigger share of any tips? 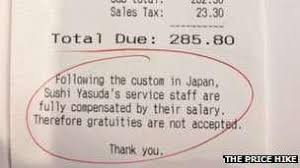 As with so many things there isn’t a simple ‘one size’ fits all answer.  What will work in one particular outlet may not be appropriate somewhere else.  You may even need different approaches depending on where your restaurant or bar is.  Customers and staff alike are likely to have a different view on the role of tipping in a London or a city centre outlet compared to what they may have somewhere in the suburbs or more rural.

That said there is one key thing which ever operator should look to do no matter what approach they decide to take.  Communicate.  Be very clear to your staff and your customers what your approach or policy is when it comes to tipping.  If you do this then everyone knows what the rules are and can then decide what they do as a result.