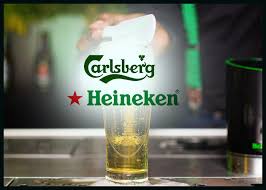 For the global brewers, as they grapple with changing consumer tastes and gently declining beer consumption in established markets like the US, Germany, the UK and Japan, Russia has been comparatively resilient.

Russia, the world’s fifth largest country in terms of overall beer drinking, was one of the few major markets around the world where beer consumption actually rose during the pandemic-hit year of 2020. It also grew by a further 3.3% during 2021.

That is why the decisions today from Carlsberg and Heineken to pull out completely from Russia will have been difficult.

For Carlsberg, in particular, this is a big deal. The Danish group owns Baltika, Russia’s biggest brewer, which has a market share of just shy of 30%. Carlsberg, which last year made 10% of its total sales and 6% of its operating profits in Russia, had already said that it will stop selling its flagship brand there and will not make any new investments in the country.

Cees ‘t Hart, Carlsberg’s chief executive, said the company deeply regretted the consequences of its decision for its 8,400 employees in Russia but made clear it had had little choice.

He said: “The war in Ukraine, and the escalating humanitarian and refugee crisis, shocks us all. We continue to strongly condemn the Russian invasion, which has led to so much loss of life, devastation and human tragedy.

“On 9 March, we announced a strategic review of the Carlsberg Group’s presence in Russia. Based on this review, we have taken the difficult and immediate decision to seek a full disposal of our business in Russia, which we believe is the right thing to do in the current environment. Upon completion we will have no presence in Russia.”

He said Carlsberg would incur a “substantial” impairment charge on the disposal but declined to give further details.

Shares of Carlsberg, which had fallen by 22% since Russia invaded Ukraine, rallied by just under 3.5% on the news.

The Danes probably had little choice in the matter after, earlier in the day, Heineken announced it was pulling out of Russia.

It is a slightly less painful decision for the Dutch giant, which is second only to US giant AB InBev in the global brewing league table, as Russia makes up around 2% of global sales.

Heineken will take a €400m hit as it seeks “an orderly transfer” of the business to a new owner. It will not seek to profit from the disposal. The company had previously halted the sale, production and advertising of the Heineken brand in Russia and had suspended new investments and exports to the country.

Heineken, whose local beer brands in Russia include Bochkarev, Okhota and Tri Medvedya, is the third largest player in the country with roughly 10% of the market.

It said: “We are very shocked and very saddened to see the war in Ukraine continuing and escalating.

“Following the strategic review of our operations already announced, we have concluded that Heineken’s ownership of the Russian business is no longer sustainable or enduring in the current context.”

The decisions from Carlsberg and Heineken to withdraw completely from Russia will put further pressure on a number of other western consumer goods companies.