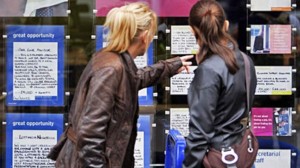 UK unemployment fell to 3.8% in the first three months of the year, its lowest level since the end of 1974, official figures show.

The number of people classed as unemployed fell by 65,000 to 1.3 million, according to the data from the Office for National Statistics (ONS).

The total number of people aged 16 and over in work rose by 99,000 to 32.7 million over the course of the three-month period, though that increase fell short of economists’ expectations.

Overall it was the latest sign of Britain’s labour market continuing to grow strongly despite Brexit uncertainty – helping maintain the household spending which drives the economy.

However the hiring spree is seen by many experts as a reflection of how companies have opted to take on workers rather than commit to longer-term investments.

That has been reflected in weakening productivity, with data from the ONS published at the same time as the unemployment figures showing output per hour fell by 0.2% compared to a year ago, its third consecutive fall.