US threatens tariffs on EU beer, gin and olives 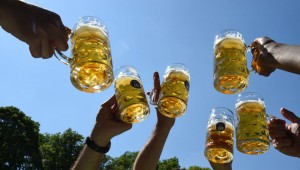 The US has threatened new trade tariffs on beer, chocolate and olives from the European Union, as part of a long-running row over subsidies to planemaker Airbus.

The US Trade Representative said it was considering duties on 30 products worth $3.1bn (£2.5bn) in trade every year.

The EU warned it would damage firms on both side of the Atlantic.

UK Trade Minister Liz Truss also criticised the move, saying that “tit-for-tat tariffs between the EU and the US is simply harming businesses on both sides of the Atlantic”.

The row centres on EU subsidies given to Airbus before 2004, which Washington says created an unfair advantage over the US aircraft manufacturer Boeing.

Last year, the World Trade Organization (WTO) ruled the subsidies were illegal and allowed the US to levy tariffs on EU goods, including aircraft, wines and cheese.

But it is now considering a parallel case involving illegal support for Boeing, which could see the EU imposing duties later this year.

The US said pastry and cakes, gin, cashmere clothes and hardware products could all be in the firing line for new tariffs, affecting exporters across the continent.