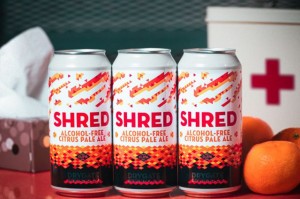 Shred, which the Glasgow brewer said is “set to make the toughest month of the year a little more bearable”, is the first permanent alcohol-free option in its range.

The pale ale is pitched as being an antidote to the “dreaded colds” that plague consumers every year, and the newcomer will join Drygate’s core range, which includes Bearface Lager, Gladeye IPA, Seven Peaks and Disco Forklift Truck.

In September last year the brewer claimed a first with the launch of “Europe’s first reforestation beer”, Scorched Earth. All proceeds from the beer were donated to Offset Earth and the brewer pledged the activity would help plant 10,000 trees with every bottle sold accounting for 50 trees. Scorched Earth was a “super limited-edition” 11.5% abv Islay whisky barrel-aged stout.

Around the same time Drygate also launched the Bearface Trust, a charity named for its signature hoppy pilsner, Bearface Lager. The brewery will donate 2p from the sale of every pint, bottle and can of the lager into a trust which will be used to support Offset Earth.